*This post was originally posted on June 29, 2018 on my personal blog, Hannah’s Heartstrings.* 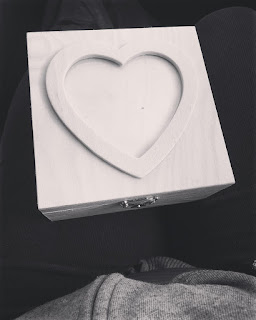 Grief is a strange thing. It is not as linear as the “stages of grief” chart might suggest. Its a lot more like waves that never really stop. You might think you’re through it, but the moment you do, something comes out of nowhere and reminds you of it all over again.

I was supposed to be 40 weeks pregnant today.

I should have been nesting, cleaning, meal prepping, and washing tiny baby clothes this week. I should have been making final plans with my midwife, and arranging care for my toddler. But none of those things needed done. Instead, I just trudged through a normal week of days spent keeping my kid occupied, and waiting for my husband to come home. Instead, I have dealt with whacky hormones and annoying hair loss that only serves to remind me that I am postpartum without a baby in my arms.

I missed the six month mark due to being out of town and occupied. June 17th came and went without fanfare, but it actually hurt a lot once I realized I had missed it. I had paused on the 17th of each month since December to cry a little, pray, and just take a moment to honor my baby. But I missed the sixth month. Perhaps because I was so focused on the fact that the same month I would be acknowledging that it had been six months since I miscarried, it would also be the month I was due to give birth to the baby I’d lost. I don’t know if you’d call that irony or not, but it felt significant to me.

It’s been a rough week, not just because of my due date, but for reasons all seeming to come from the same theme. I’ve tried to take care of and be gentle with myself. I have been learning a lot about trapped emotions lately and how they effect the body physically, so I have been careful not to bury things or suppress big emotions. Even still, this is hard to express.

Like I said, grief is a strange thing. It is filled with such a range of emotions. Sadness, loss, failure, anger. You never quite know what you’re going to get.

Once I knew my miscarriage was complete that day, I was filled with an overwhelming feeling that I can only describe as a sense of finality. The violence that I experienced from my body left me with nothing but an ending. It was so completely final. I felt like I was standing there utterly empty handed. I’ve only experienced that a few times in my life, with the losses of friends or after heartbreaking experiences.

Endings are hard. Even if the end is good, there’s still a sense of loss and nostalgia for what once was. I am still in the midst of this ending. I know that there will be new beginnings eventually, but knowing that doesn’t always bring as much comfort as it’s supposed to. I know a lot of things that people generally think should negate the pain. I know that I am grateful to have one child already, that my baby is in heaven waiting for me, and that I will probably have another baby eventually. But that doesn’t make it any easier.

And you know what? It’s ok.

The Bible says that we do not sorrow as those who have no hope (1 Thess. 4:13), but it does not say that we don’t sorrow at all. It’s ok to mourn and grieve and feel big, deep things. We don’t have to pretend that the loss doesn’t hit us hard simply because there’s so many other things to be grateful for. We don’t have to heal on anyone’s timeline, or “be ok” because not being ok makes people uncomfortable.

Our God is truly faithful, and He does carry us through the worst of storms and battles. He doesn’t push us to “be ok,” but points us toward himself as the ultimate source of peace and healing.

So today, on the day I would have been expecting my baby to be born, I am resting and writing, crying and praying, singing and being still. I took my toddler out for an ice cream date, and am spending time reflecting on all the joy he brings to my life, as well as all the love I’ve received over these last six months from so many people.

Grief is big and real. Its heavy and takes time to process. Trust the process and the One who created it. Don’t rush, don’t be ashamed of it, and don’t make excuses for it.

If you are going through something that fills your heart with grief, please remember the biggest and most important thing: you are never alone.

(Photo of the little wooden box that we buried the tiny earthly body of our baby in last December. I will always be grateful for the 12 weeks that I got to be this little one’s mama.)

I’m Hannah. Welcome to this space where we celebrate, support, and learn together all things concerning pregnancy, birth, and postpartum journeys. Thank you for joining me!